Today should be about Andrew.  A kid who lived at Cary Quad and loved Grand Prix and had always dreamed of going to Purdue to be an engineer.

And I'll be thinking of Andrew today, and every time I pass the EE building.

Since the Sandy Hook tragedy of December 2012 which took precious 28 lives and injured 2, there have been 35 school shootings.

Since the Virginia Tech tragedy of April 16, 2007 which took 33 precious lives and injured 25, including Sean McQuade, the nephew of my Purdue roommate and dear friend, there have been 86 school shootings.

Since the Columbine tragedy of April 20, 1999, which took 15 precious live and injured 21, there have been 117 school shootings.

Posted by Georgiann at 1:00 PM No comments:

Stacks of Books for the New Year

But first, I wanted to share a reading guide for the new year from the Bluestocking Salon, the blog of the Bas Bleu (champion of the odd little book  -- perfect for odd little me) website.  (And thanks to my friend, Bonnye, who told me about this site.)

Here are their reading resolutions for 2014, plus my suggestions.  For myself.

1. Read something massive. Like, minimum-six-hundred-pages-long massive.  The Goldfinch by Donna Tartt is on my 2014 list.  At 784 pages, it qualifies.
2. Reread a high-school assignment.  OK, high school was 35+ years ago, and honestly, I don't remember what I read for assignments and what I read for myself.  So, I'm just going to re-read a Jane Austen book and call this one done.
3. Read a scandalous book.  Hmmm.  I searched for "scandalous books" on Goodreads, and it gave me lots of lists and lots of books, from Fifty Shades to The Girl with the Dragon Tattoo to The Giving Tree.  The Giving Tree?  Really?  Although I would gladly re-read that favorite to try to figure out why in the world it would be scandalous, I think I'm going to read East of Eden, which a lot of people think of as Steinbeck's magnum opus, but which, for some unknown reason, I have never read.
4. Read a book from a genre you normally avoid.  Well, that would be science fiction or horror, both of which I avoid like the flu.  Any suggestions that won't make me sick?
5. Read a novel set in contemporary times, yet in a completely different culture from your own.  The Lowland by Jhumpa Lahiri.
6. Read that venerated classic you’ve always been ashamed to admit you skipped.  I skipped George Eliot's Middlemarch big time in college.  And by that, I mean it was assigned, and I used the Cliff Notes version.  Cliff and I were very good friends.

7. Read a contemporary young-adult novel.  The Indianapolis-based The Fault in Our Stars by John Green.  I started this one last year, but need to finish.
8. Read a biography of someone you think you’d hate.  I'm think I'm going to skip this one. While I really like finding out redeeming facts about awful people, I don't think I want to waste my reading time on them, just in case they're just awful and not so redeeming.
9. Read a poem a day, every day, for a month.  I do this anyway.  Just have The Writer's Almanac delivered to your inbox every day, and you can, too.
10. Host a literary dinner party.  Well, this sounds like fun.  We'll have Madeleines, pisco sours and green eggs and ham.
11. Write the opening paragraph of your autobiography.   Can't this blog count?
12. Memorize your favorite Shakespearean sonnet or a monologue from one of the Bard’s plays.  Been there, done that.  I don't really have a favorite sonnet, but I think it's time to read them again.  Memorize?  We'll see.

I didn't do a ton of sewing for Christmas -- I was a little busy trying to crank out stockings before Santa arrived!  But I always try to make a little something for the boys, and here are the three pillows I did get done.

If you remember, Tommy and Nate were Chip and Dale for Halloween, and I had plenty of brown fleece left over from their costumes.  These pillows are my favorite envelope-style, and working with fleece is extra easy because you don't need to finish any seams or edges.  In fact, I used the selvage edges of the material for the opening edges on the backs of the pillows. 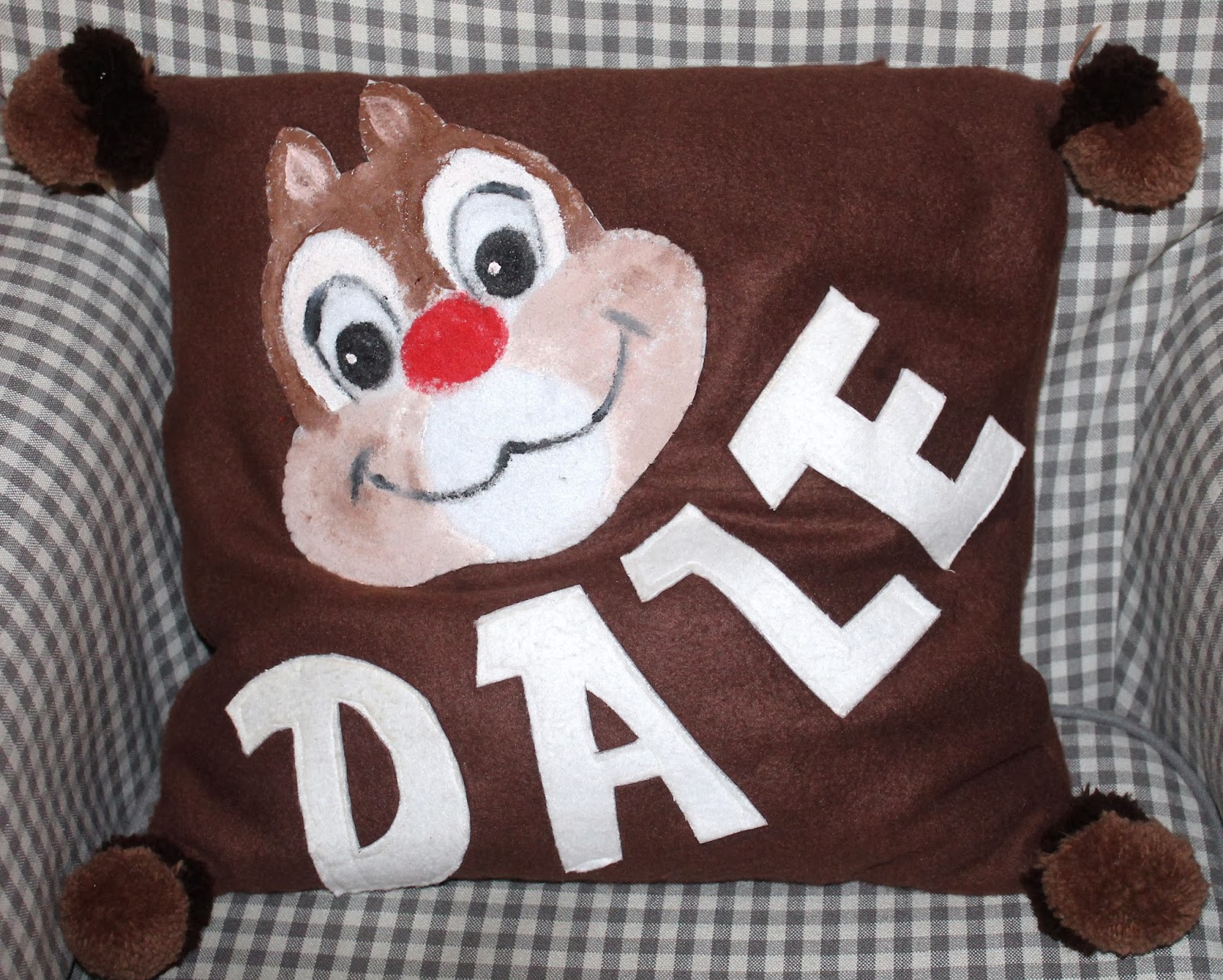 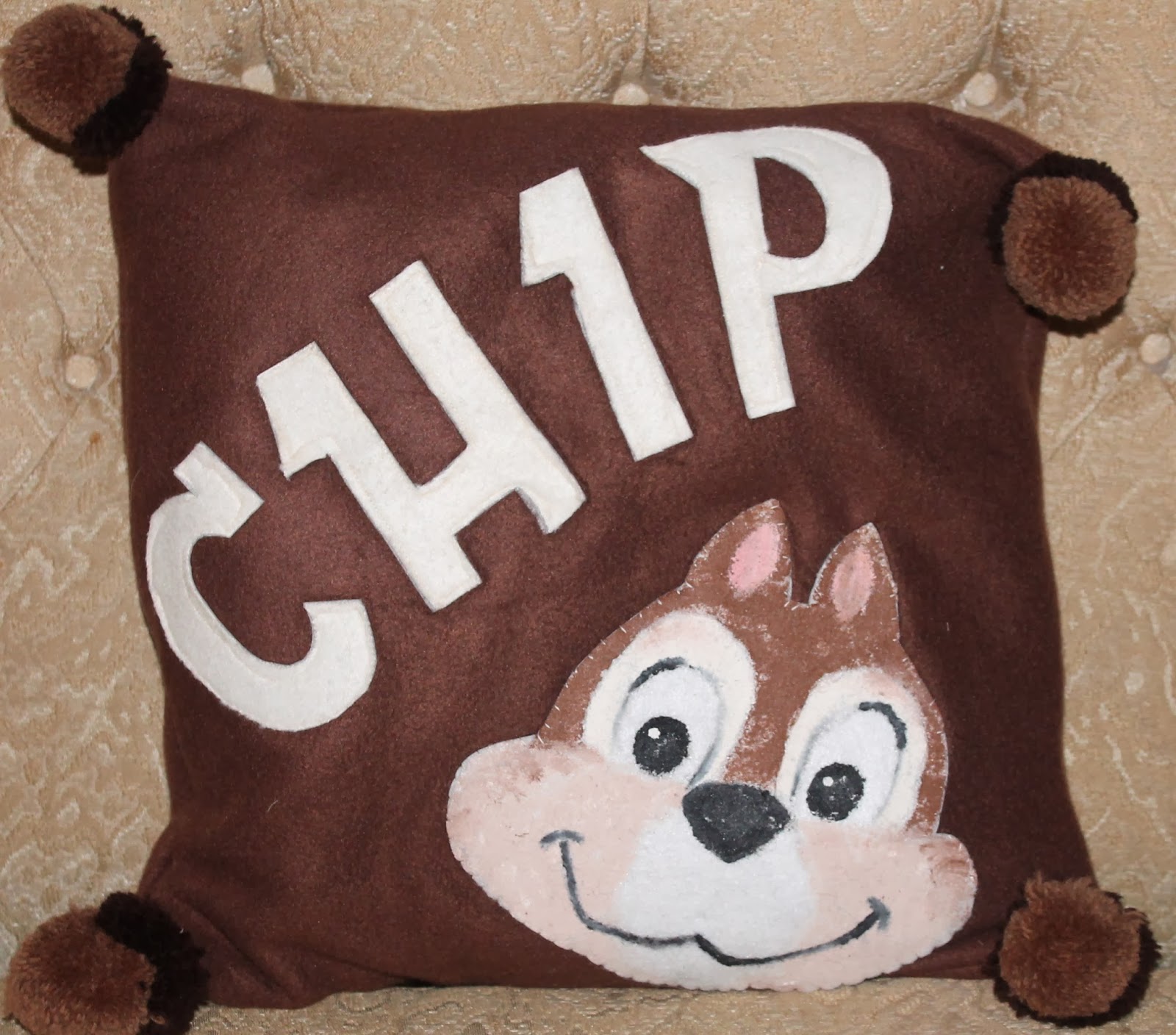 I googled "Chip and Dale font" and found this simple lettering style.  I ironed on fusible to some of the white fleece, drew the letters backward, cut them out and then sewed around them using the darning foot on my machine.  I whip-stitched around the faces by hand and added the acorn pom poms; they were really fun to make and I plan to put up a little lesson on those sometime soon: 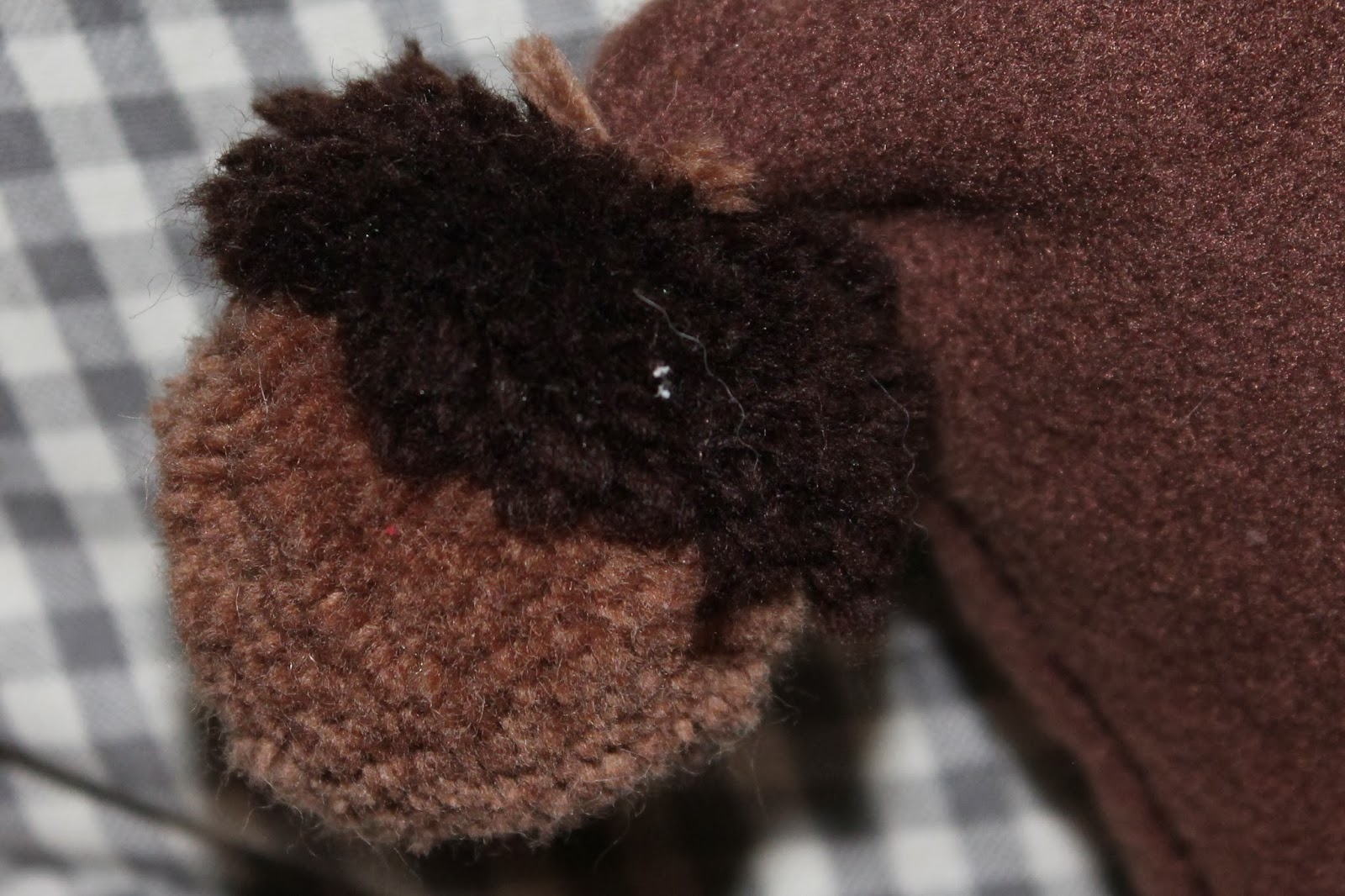 And I didn't want Paul to feel left out, so I made him a pillow, too. 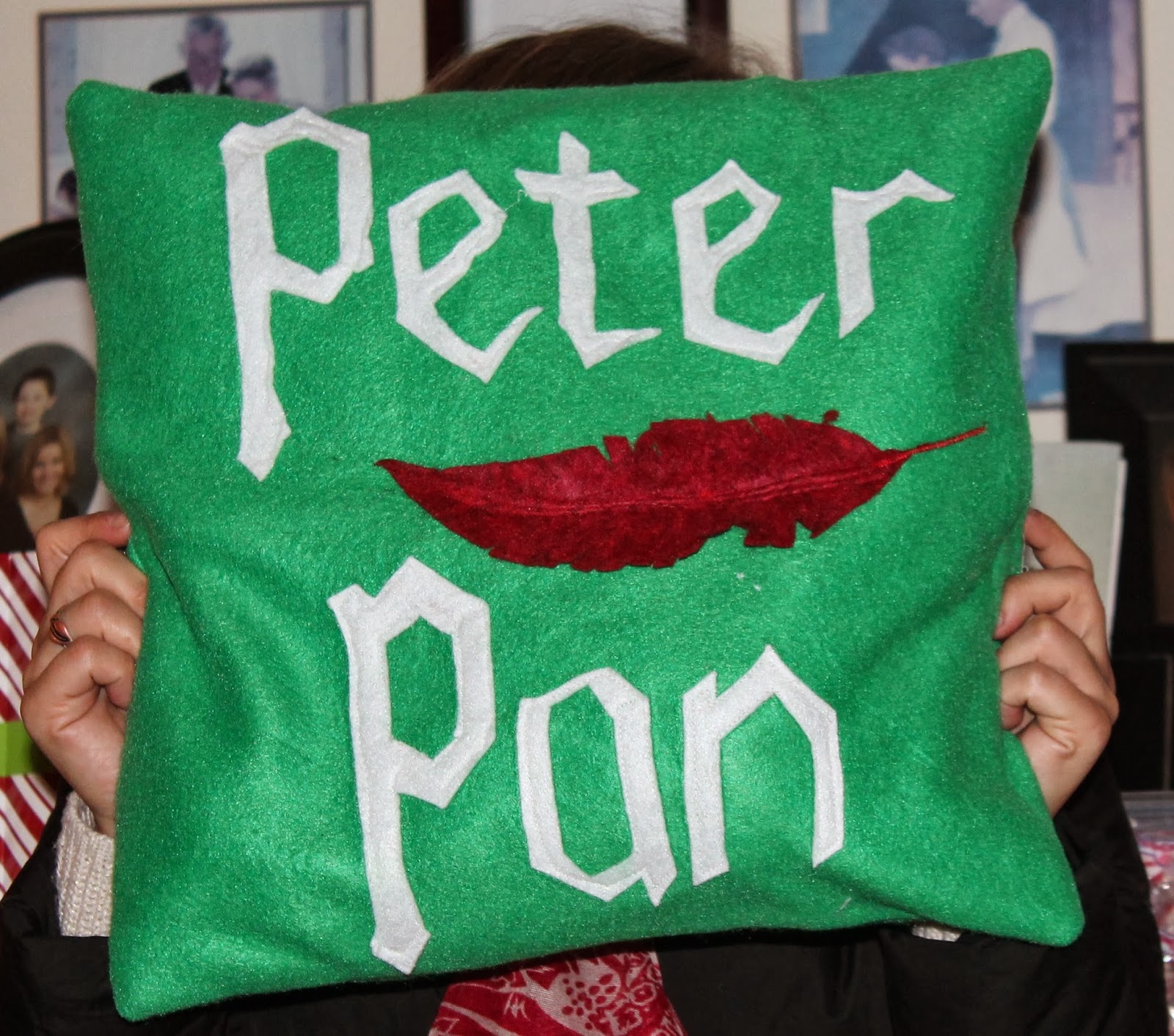 Same basic idea.  The feather is some red fleece, clipped to be fluffy.

Posted by Georgiann at 9:47 AM No comments: 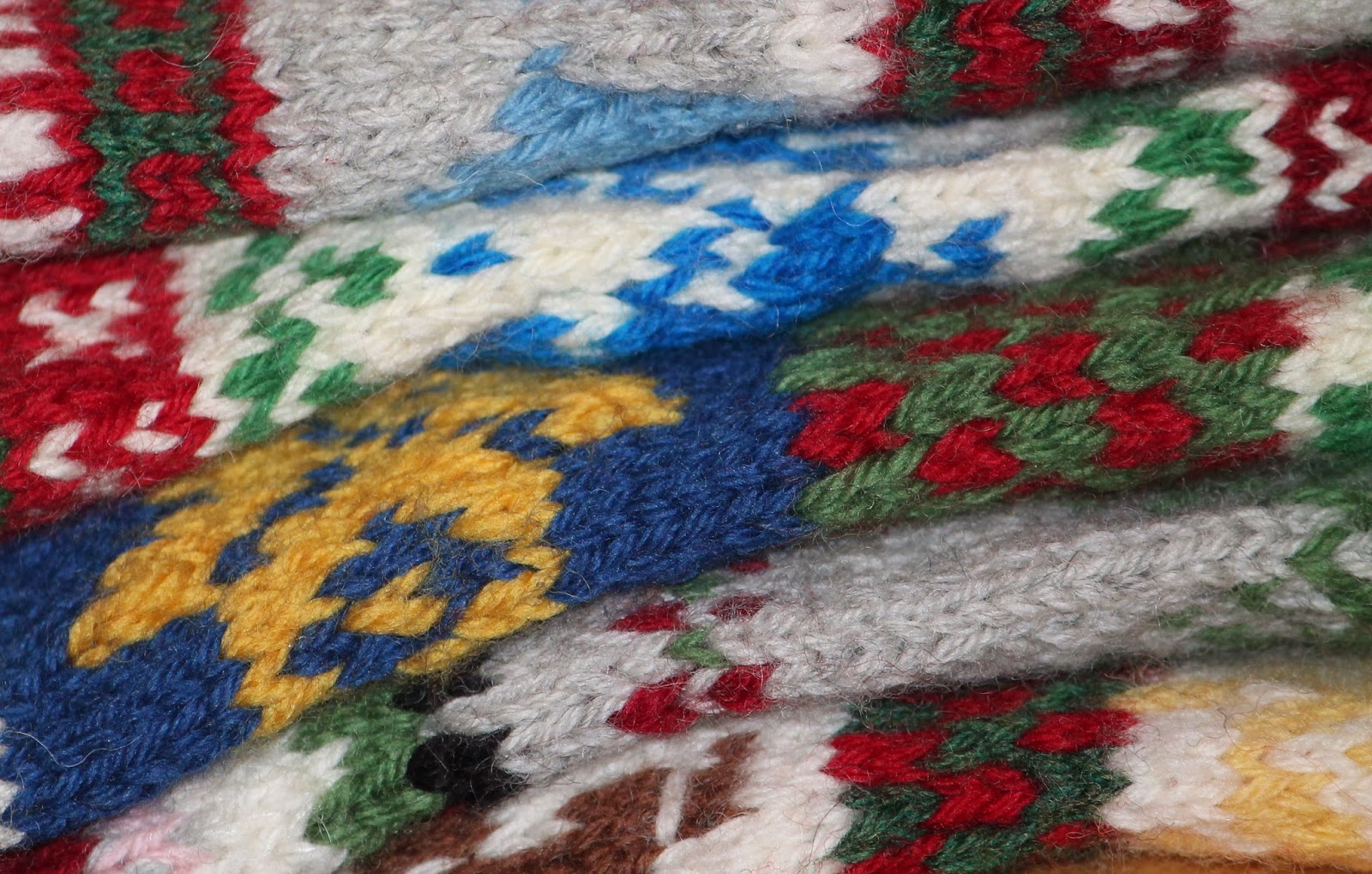 Two years ago, I made Christmas stockings for our school auction.  Several people who didn't win the stockings that evening asked if I could knit some for their families.  I agreed, but warned them that it could take me awhile. 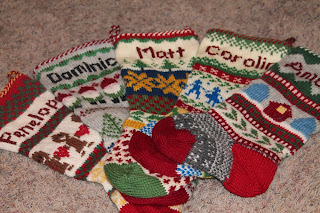 I used the good old Cascade stocking recipe I have used many times before, but the gnomes, houses and paper dolls are from other sources.  I made up the gingerbread cookie chart myself

I really love those gnomes.  Or elves.  Cute little guys: 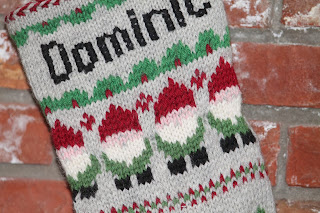 I can't seem to locate the chart -- I do know that it was free.  I'll keep looking, though.  I used a little bit of mohair in their beards.  The pattern called for french knot eyes, but I took those out, and think they are cuter without wonky, beady eyes.

One of Griffin's Halloween costumes this past year was a fox, so I thought he needed this hat, which is crocheted from a GarnStudios pattern.  The yarn is Vanna's Choice from Hobby Lobby, because it was the perfect color for a fox. 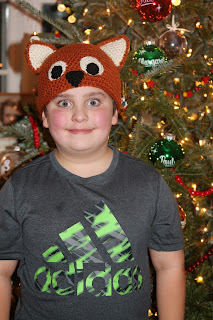 Sharon found a cute hat on pinterest and wondered if I could make it.  I could.
The pattern is the Wavy Moss Headband/hat from Cedar Box Knits and the yarn is some bulky stuff I found at Hobby Lobby, too.
I knit the hat again in some beautiful Lorna's Laces bulky that my friend, Christie, gave me for Christmas:
I never want to knit with anything but Lorna's Laces ever again.  And as soon as I win the lottery, that will happen.

Sometimes, though, you just have to pretend you are knitting with LL.  This Budding Infinity Scarf for my other darling sister is knit with Red Heart. Not my favorite.

But I had won a huge skein at a Christmas party, and since my darling sister likes neutrals, I thought this was the perfect color for her. 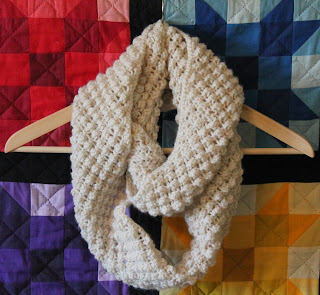 I think Red Heart is a lot softer than it used to be -- at least this skein didn't squeak when I knit with it. However, I still wanted it to be softer, so I went online to find a solution.
There are lots of ways to make acrylic yarns softer, and I ended up combining two ideas.  First, I soaked the scarf in a sink of warm water with 1 cup of white vinegar for a few hours.  After I washed out the pickle smell with some Woolite, I soaked the scarf again in a sink of warm water with 2 big capfulls of fabric softener.  I'm not a big fan of fabric softener because of the plethora of chemicals that go into it, but I conceded that maybe this was the best way to go. And it was.  After soaking for 2 hours, rinsing and a short stint in the dryer, the scarf is soft enough to wear close to her face. 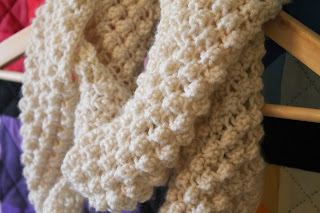 This pattern was not difficult, but be warned -- ever other row is 260 purl stitches.

Posted by Georgiann at 10:29 AM No comments:

I love to recycle.  It makes me feel like I am doing my tiny bit to save the earth.
I recycle everything I can, but recently our town decided they were no longer accepting glass at the recycling center.

I asked a friend who works for the city what we should do, and her advice was to purchase fewer things in glass.

So, our basement and garage are full of glass.  I just can't put all those bottles and jars in the trash -- it just feels wrong.  My mom canned in recycled glass jars and bottles, but  after two years teaching food safety, I just can't do that, either.

I use saved Starbucks frappuccino bottles for drinks for the kids for the holidays -- chalkboard labels, cute straws and cupcake paper lids (thanks again, pinterest).  And I used a lot of the jars for packaging the lavender body scrub I gave to friends this Christmas, but I think this is my favorite recycled project for 2013: 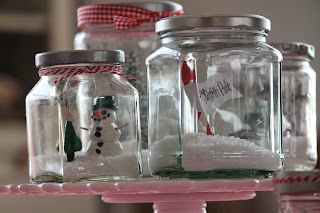 After I scrubbed all the labels and sticky goo off of jelly, pickle, hot fudge and salsa jars, I spray painted the lids silver.  I had the little trees in our Christmas stuff, and the only thing I purchased was the Mini Cooper for $1.00 at Green Letters (more commonly known as The Dollar Tree, but I like Paul's name better, don't you?)  I made the snowman and his little tree plus the finial on the North Pole (which is just a straw) out of Sculpy (that was fun -- I hadn't made anything with clay for ages, but the clay was still moist and usable). 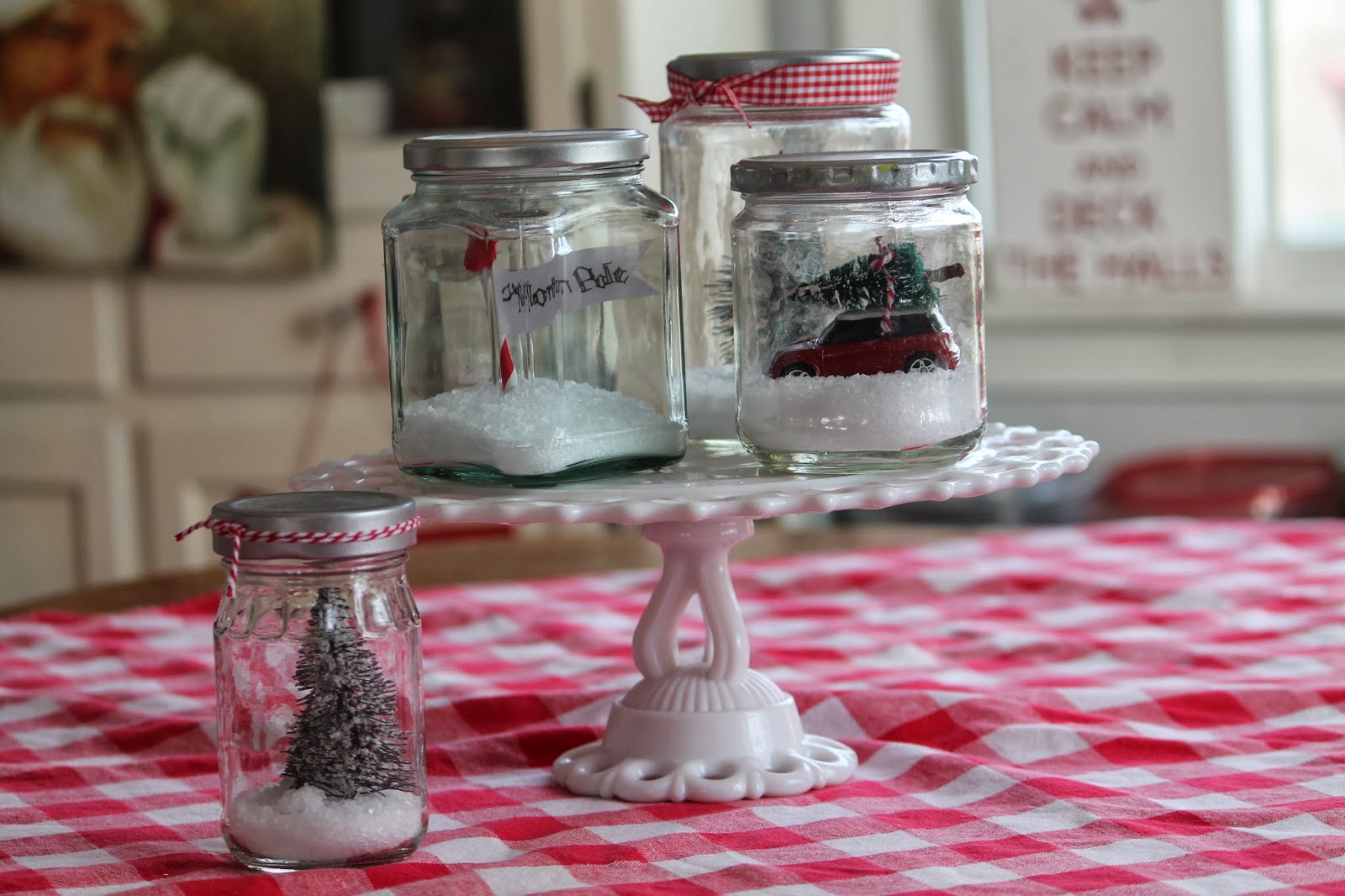 I poured Epsom salts in for snow, added some ribbon and baker's twine and arranged the jars on a white cake plate for a happy little arrangement on our dining room table.

Posted by Georgiann at 9:27 AM No comments: