Surprise! "Sasha" is a boy. He is also around 1 year old, weighs about 12 pounds, tested negative for feline leukemia and FIV, and has a bad case of fleas and ear mites. He was very well behaved at the vet, after an initial bout of nerves. Dr. Paul suggested the "stray cat special," so Sasha is staying overnight for a shave, worming, vaccinations and separation from his manhood.
He'll also be getting a new name. Names currently in the running are Toulouse, Edgar, Henry, Napoleon and some obscure names from Atlas Shrugged -- Dagny and Taggart. (I have promised Clay that I will read that book someday, but manifestos of conservatism are not high on my reading list. It was a happy day when Will started reading it and got me off the hook for awhile. The sad thing is, I think my liberal-hearted little boy is turning into some kind of McCain-loving Republican. Another sad thing -- I might have to take an "R" in the primary so that I can vote for our friend, Tom, for county commissioner. I really want to take a "D", since it looks like there is still going to be a race for the presidential candidate -- I thought by the time we got to Indiana's primary, it would be all over and decided. I really don't like Indiana's primary system.)
Back to the cat. Dr. Paul said he would do fine as an outdoor cat, but since he is basically healthy, he could live inside, as well. But could Lucky stand having another cat in the house? She has been the queen bee around here for 15 years. Hmmm. "Sasha" will be home tomorrow afternoon, and we shall see. Another update then.
Peace
Posted by Georgiann at 4:18 PM 3 comments:

A pretty long-haired yellow cat began hanging around Sarah's house before Christmas, and Sarah fed her, and sometimes let her in the house when it was cold, despite the fact that two dogs live there. Then her hair began to fall out. Sarah was very worried about her; they called the Humane Society, but they wouldn't take her since they live in the city limits. ? I offered to bring her down here and take her to Dr. Paul, so she has been living on or under our front porch for the past few days. 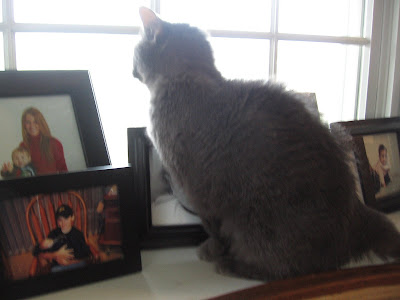 Which is why Lucky has spent most of the past few days in the window sill, protecting us.

We have an appointment tomorrow afternoon. My history of taking cats to the vet isn't so good; on Lucky's first visit to Dr. Otte, she left a huge gash in his hand. And as much as I like animals, and as much as I want this cat to be healthy, I'm hoping it doesn't cost a mint to make her so.
St. Francis, pray for us!

Sarah called the yellow cat Ashley, in memory of Grandma Shirley's cat, but Will has renamed her Sasha, (after JD's scooter on Scrubs. I don't get it either, but the name seems to fit.) I tried to take a good picture of her, but they were all very blurry, as she is in constant motion, always rubbing on my legs. Very friendly. Maybe too friendly -- Clay thinks PK made a visit Friday evening -- he heard that unmistakable screech of kitty love. I do love kittens, but that's probably the last thing we need around here.

How many cats can you have before they start calling you a crazy cat lady? 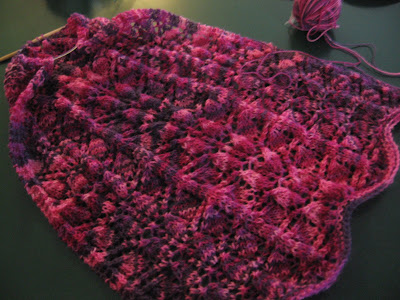 On the knitting front, here's my progress on the Triple Branching Out shawl.

for my friends in the cold north. 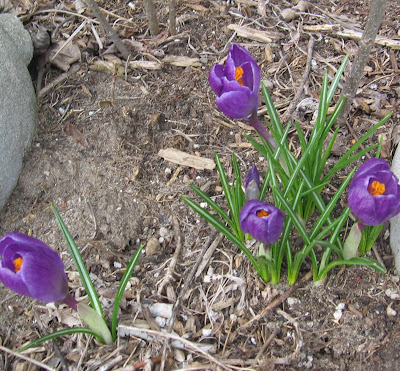 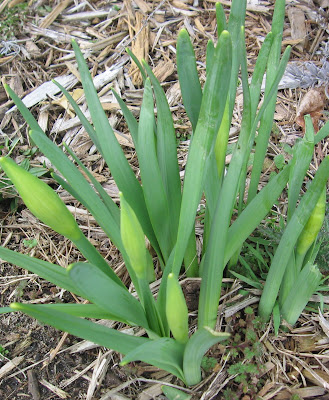 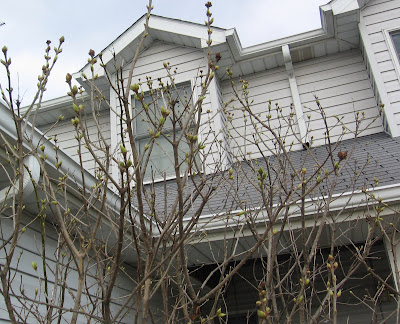 With love, from the getting-warmer Midwest.
Posted by Georgiann at 2:48 PM 2 comments: 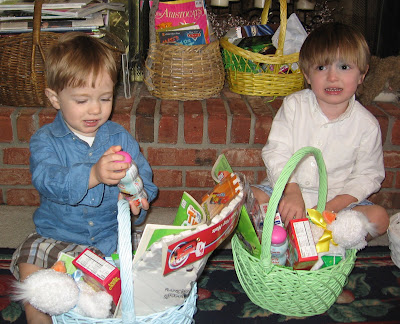 (I tried to fix Tommy's red eye, but I think I gave him eye shadow!)

We had such a great day, despite the fact that I burned the Derby Pie (don't try starting a pie at 11:00 PM after the Saturday Easter vigil), I didn't finish dusting and it snowed during the egg hunt.
Saturday night's fire wasn't quite up to Father's standards (last year's fire is legendary -- "The Biggest Fire in the Archdiocese".) I don't know if it was the wind, or not enough lighter fluid. It was a nice fire, but I was hoping for a YouTube-worthy spectacle. Clay (who would rather not sit through the vigil Mass unless some member of the family is joining the church) did fireman duty and made sure the fire was out.

Maybe next year we should bring in a Christmas tree.

The Easter bunny brought Will a new leather Indiana Jones whip and the John Adams book by David McCullough. And a Dove solid chocolate bunny which he polished off on the way to school this morning. At our house, the boys got watches, bubbles and little boxes of cereal -- the Easter bunny loves to shop at the dollar store.

After everyone headed home, Clay and I napped on the couch, waking up in time to watch the next episode of the John Adams mini series on HBO. (I constantly lobby to get rid of the movie channels, but then something great like this comes up.) It is so good -- I can see that being a DVD gift in Will's Easter basket next year.
Some knitting, as promised: 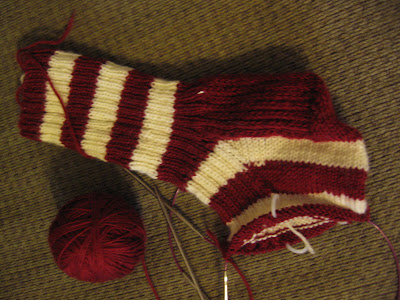 The problem with these conversational knitting books (The Sweater Workshop and the EZ books included) is that if I read too fast, I miss crucial instructions, like "move half the stitches to the other needle". I had quite a mess, and ended up ripping back to the beginning of the heel flap. And it feels way too big, even though I checked the gauge carefully. I need to finish this one and start the second, but I haven't touched this for about 2 weeks. I just don't think I am a sock knitter, although, when things were going quite well, on the leg of the sock, I was making all kinds of grandiose plans in my head about who I would knit socks for next! 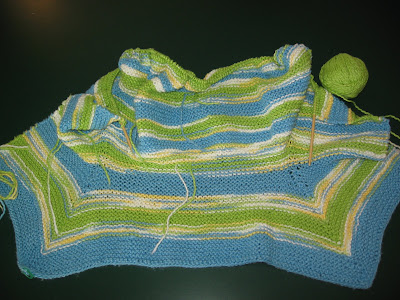 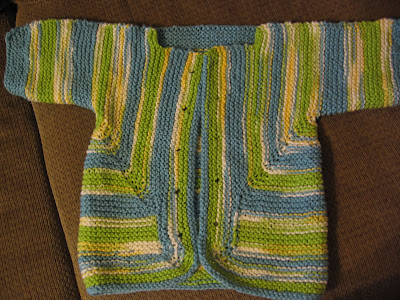 I really enjoyed knitting this, but again, I would have been lost in EZ's pattern if it weren't for help I found on the Internet. And surprise! This would have to be for one really big baby. I was planning it for Josh and Marissa's baby, (who you can see here) but it fits Griffin (who is still our baby, but 18 months old this week.) 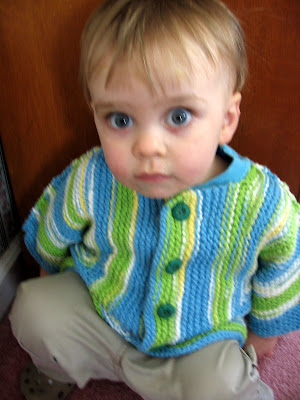 I think I will add a collar and an inch or two at the wrists. Five pretty green antique buttons from my mom's button collection. Thanks, mom.

Here is my new plan for baby Gwyn -- the Heartbreaking Cute Baby Kimono from Mason-Dixon Knitting, in Cottontots, too: 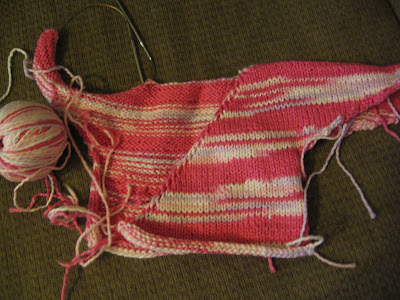 Last week, I also cast on for a shawl, using Knitpicks Gossamer in the Sweet Peas colorway that I found in the basement. I really have no idea what I purchased that for -- usually, I'm not one just to buy yarn -- I almost always have a plan. I love the knitty Branching Out (I've knit it 3 times now) so I worked it out to repeat the pattern 3 times for a wider shawl, and I'm knitting on #6 needles. I hope it is as pretty as I dream it will be.

My sister and her husband host a Good Friday fish fry every year, and one year, their Christmas tree made it to the fire pit. Viola! A tradition was born. I think some kind of connection could be made between the commemoration of Christ's death and the burning of the Christmas tree, but it's really not that deep -- just a bunch of people who come together to see how fast a dry evergreen can go up in flames.

We (meaning Rocky, our friend and fire bug) burned 5 trees this year. The weather cooperated last night-- it had been windy all day long, but the wind died down around 8:30. Hope we have the same good luck tonight at the Vigil Mass -- I'll take my camera.

Knitting content next week, I promise. Lent is rough on church musicians, who have a few catering jobs and three major projects thrown in for good measure. You'd think I'd given up the computer for Lent. And I know you're not supposed to talk about what you give up, but I am really looking forward to a trip to Starbucks Monday morning!

Posted by Georgiann at 12:24 PM No comments: 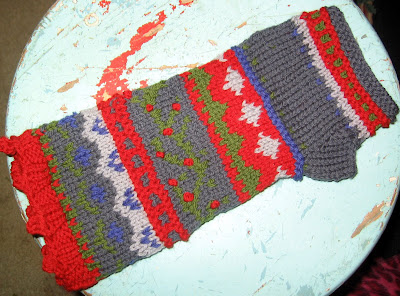 I'm using the Knitpicks Telemark. Not so sure I like this as much as I had hoped I would -- it looks a little too Christmasy, I'm afraid. Will I really wear these? Hmmm. They might just become a gift.
Also, since I am studying up on Elizabeth Zimmerman, a couple things about this pattern bother me -- long floats and more than 2 colors per row. In the viney section, I went back and added red french knots instead of carrying 3 colors.
- reading The Kite Runner. What a book. I like this much more that I had hoped I would.
- tearing out the Perfect Pie shawl. 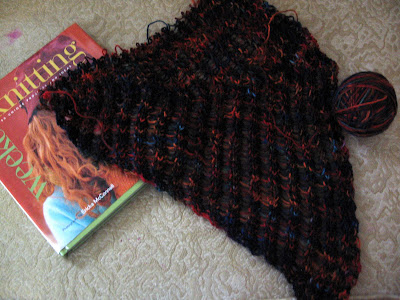 (Thought I should take a picture before I ripped it out completely.)
I set it down, sure that I would remember where I was. But I didn't. And I just couldn't figure it out. And, I forgot to add a lifeline. So I will be starting over, because I really love the rhythm of this shawl. Will I ever wear it? Hmmm. This also might become a gift. But the yarn was a gift from Kemtee, so maybe it is only right I pass it along.
- eating the leftovers from Will's birthday dinner Saturday night at the Rathskeller in Indy. The question at that restaurant is, should I eat all this deliciousness on my plate and get the meat sweats, or eat until I am full and take the rest to feed a small pack of dogs?
- admiring every flock of Sand Hill Cranes that lands in the fields around our house. Oh, I still love them, but I don't stop every day and roll down my window to listen to their calls like we did a few weeks ago. There have been more birds making a pit stop here this year than I can ever remember; it's like an avian O'Hare -- land, re-fuel, make a lot of noise and then take off for who knows where. They're not the most photogenic birds, and tend to blend in with the landscape. But here's a picture anyway: 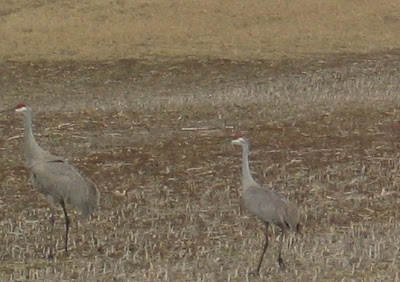 I've started the Baby Surprise Jacket. So far, so good. 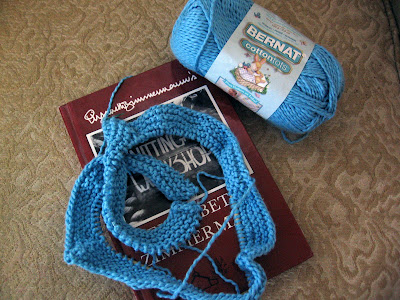 And, I am going to try socks again. I ordered some sock yarn in red and white (cream and crimson) to knit some socks for dad. I also bought Socks Soar on Two Circular Needles, and two sets of circs in both the wood and metal from KP, as well. We'll see.

Another awesome coincidence: I just finished a book about Afghanistan. I just started the BSJ. I opened the latest issue of World Ark, the magazine of Heifer International, and saw an article on Ann Rubin, who started the famous charity knitting program, Afghans for Afghans. And what is she holding in the picture? A BSJ.