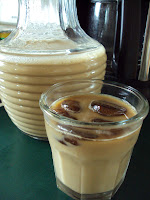 Last summer, on a whirlwind trip to Atlanta, we stopped in Nashville to spend a little time with our dear friends the Mrozinskis.  As it often does, our talk turned toward good food and drink, and I mentioned how I was obsessed by The Pioneer Woman's iced coffee, and explained the whole process to Pam.

She listened politely, and then said, "You know what's even easier?"

Here's what she does:

Brew one pot of coffee.  (I used decaf because A:  that's what Pam drinks and B: I like this in the evening, when I just don't need any more caffeine!) 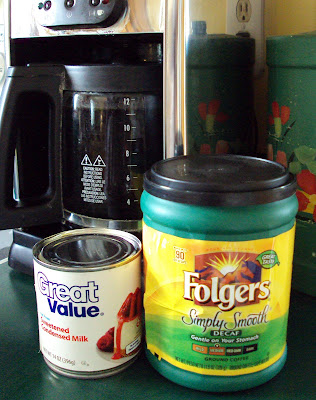 Pour one can of sweetened condensed milk in a large heatproof bowl: 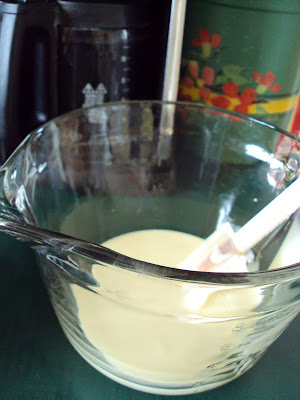 Stir in the hot coffee till the SCM (perhaps my favorite acronym ever!) is completely dissolved: 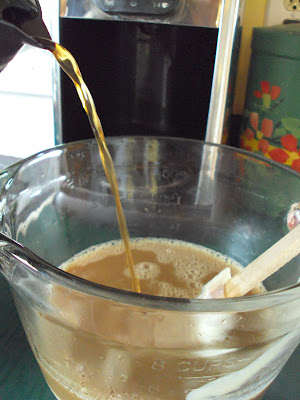 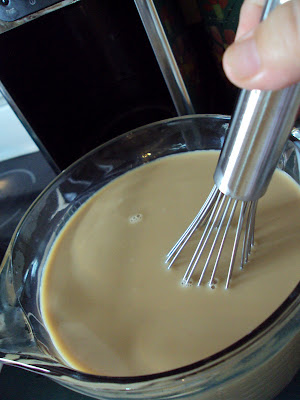 Let cool, and serve over coffee ice cubes, which, of course, Pam had all ready in her freezer.  And, of course, which I do now, too. 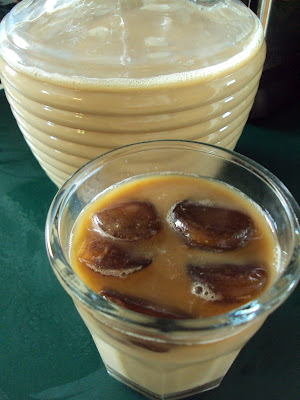 (My ice cube trays were in use freezing up some grated ginger when I made this up last week, so I tried making the cubes in mini muffin tins.  Cute, but they don't want to release too well.  Back to the trays!) 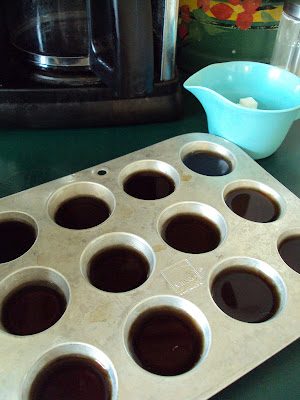 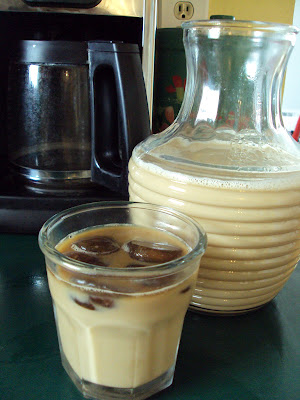 FYI -- the reduced fat SCM works just as well as the original SCM.  Lucky us!
FYI #2 -- this could be further enhanced with Kahlua, Bailey's or a shot of Maker's!

Posted by Georgiann at 7:13 AM No comments:

If you know us, you know that our family motto is


Use it up
Wear it out
Make it do
Do without

Me?  I hate that motto.  Ok, I accept the motto, and try to live by the motto, albeit rather grudgingly at times.

But after 30 years, it's beginning to sink in.  Let me explain.

This is my Ipod.  My beloved Ipod that my beloved Clay gave me even though I already had a smaller one (see, he doesn't always live by the motto, either.)  As you can see, it had a small accident: 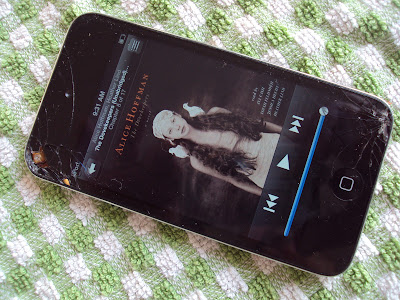 I believe it took quite a tumble out of someone's car.  I'm not going to point any fingers here, but let's just say  I WILL not take responsiblity for this.  (Get it?  WILL?) 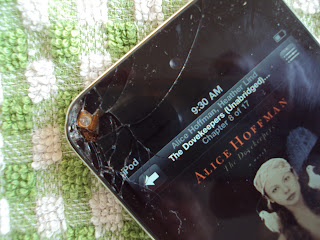 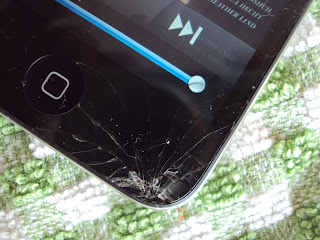 Anyway, it still works just fine.  So I decided to make a little cozy so it will look pretty again and hopefully survive another fall. 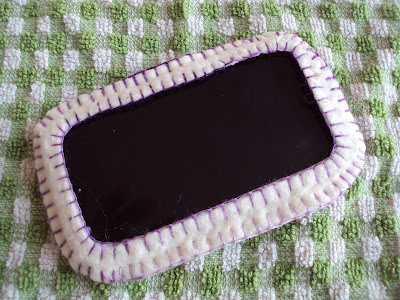 I used some wool felt (leftover from a big Santa project many years ago) and cut two rectangles a bit larger than the Ipod.  (No measurements here -- it was all trial and error!)  For a little more stability, I ironed on an inner facing.  Then I cut out for the screen, and buttonhole stitched around the inside.  I did a little fancy stitching on the back, as well: 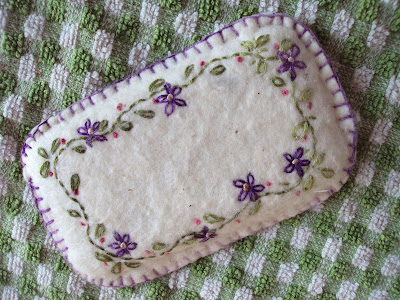 Then, I stitched the front and back together with more buttonhole stitching, leaving an opening for the charger/dock site and the headphone/car jack. 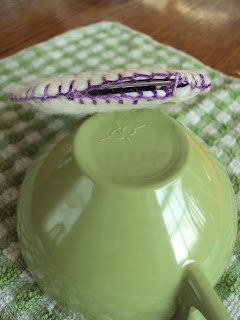 Not perfect, not quite square, but much nicer looking than the cracks.  Make it do.

And just a note on the book which I am listening to on my Ipod -- The Dovekeepers by Alice Hoffman.  Amazing.  I am so glad I have the audio version on this book -- the readers are so, so good and tug at your heart as you listen (as opposed to the last audio book I listened to -- Down River by John Hart.  The reader just wasn't right for that book, and actually pretty annoying, especially when he tried to do a woman's voice -- the whiney tone just about drove me crazy!  I didn't couldn't  finish listening, but Clay told me the end of the story because as you know, if we purchased it, he is going to use it up!  But he didn't care for that narrator, either.)  I do wish I had a hard (or nook) copy of The Dovekeepers, though -- it's one of those books that you want to go back, re-read a passage or do some more research before you continue.  Historically based in 70 C.E. (70 years after the birth of Christ), it's the story of Jewish women forced from Jerusalem into the desert.  I'm not yet halfway through but I am hooked; I have found myself driving around the block or sitting in the driveway listening for just a few more minutes! 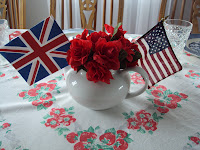 Who doesn't love the Olympics?  No one around here!  Those two weeks go far too fast, in my opinion, and we watch as much as possible, even the table tennis and badminton.

We did a little Olympic cooking to celebrate.  The first Saturday, Clay and I tried Tikka Masala (although Indian, one of the most popular dishes in London, accoring to the BBC).  Oh my.  It was complicated, but delicious.  As soon as I can locate the pictures we took, I'll post the recipe we used.  I think it might become a new standard around here.

Then, on the second Sunday, we had a family dinner, British-style.

The boys helped me decorate: 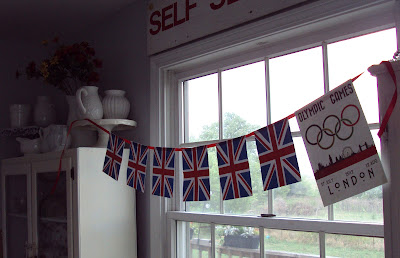 and set the table: 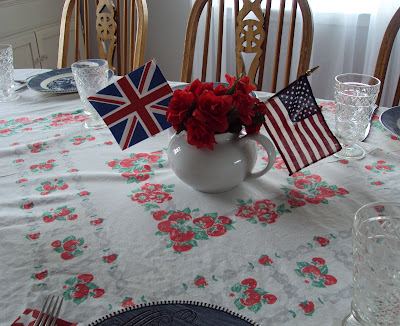 We made Mushy Peas, which Clay remembered fondly from his trip to England: 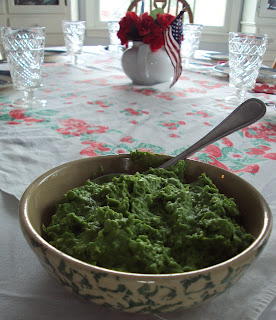 The recipe for these is so simple:  cook a 10-ounce bag of frozen peas (we microwaved them), drain them, smash them with 1/4 cup of heavy cream, a Tablespoon of butter and a 1/2 teaspoon of salt and 1/2 of pepper.  Oh my goodness -- sounds weird, tastes wonderful!

We also had roast beef and mashed potatoes (sorry, no pictures -- why do I always forget?), but no Yorkshire puddings as planned -- the meat took a little longer than we had hoped and we were all starving.  So, nice rolls did just fine.

For dessert, we had Eton Mess, which I had seen Jamie Oliver make earlier in the week on the Today Show: 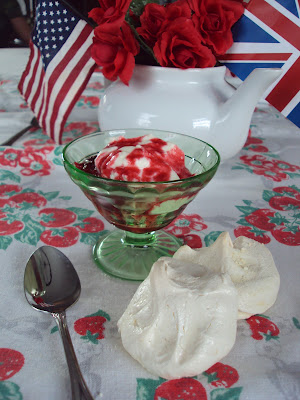 Again, pretty easy.  Meringue cookies, crumbled in the bottom of your dish, raspberries spooned on top, whipped cream (leftover from the Mushy Peas!) and raspberry sauce over all.  I read lots of recipes for this; most call for using meringue cookies you buy from the store, but of course, this not being England, our stores don't carry those.  So I made them, using this recipe. Not too difficult, and very good.  Just make sure to keep them in an air-tight container, or they'll be just like yesterday's cotton candy -- you know, still delicious, but almost too sticky to eat!

The sauce is just a small bag of frozen raspberries and a 1/2 cup of sugar cooked low on the stove until the sugar dissolves, then put through a sieve.  Let it cool completely before putting this dessert together. 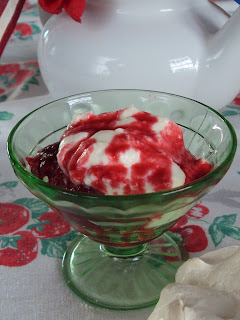 Finally, last Saturday morning, Clay and I got up and made little scones; I had been awarded the Silver Slacker at National Council (a silver tray lovingly given to the last council member to arrive at our meetings) and was responsible to fill it with a little treat for Saturday's meeting.  Since I don't really believe in little treats, I took my teapot, teacups, Earl Grey, scones, jam, pseudo-clotted cream (a little bit of homemade clotted cream plus a can of Crema -- delicious) and we had a lovely afternoon tea.

Unfortunately, I was the last one to arrive at the meeting Saturday (not late, but still my fault -- I had to make a Starbucks run) and was once again awarded the SS.  Thank goodness, my pal (and candy-making Queen) Cathy offered to fill it for our December meeting.  She doesn't know about little treats, either!

We're ready for the Winter Olympics, since we have experimented with Russian food many times and we all love it.  For Rio in 2016?  I think I'll have to do a little research, as the only thing that comes to mind is lots of meat.  On a big stick.

Posted by Georgiann at 8:45 AM No comments: