Today is the birthday of John Steinbeck, one of my favorites, who said: "The writer must believe that what he is doing is the most important thing in the world. And he must hold to this illusion even when he knows it is not true."

As a writer, I know this is true.  But I'm not acting like it.  If it's the most important thing in the world, then why am I not sitting down and tippy-tapping out delightful words for eight hours a day?

(As aside -- wouldn't the world be a much lovelier place if everyone believed that the work that they do -- whether for salary or not -- is the most important thing in the world?)

And writing can be discouraging.  Our book, Escaped With Honor, is now in the substantive edit process.  What this means is that everything we have worked so hard on for the last year and a half -- every paragraph, sentence and word -- has been picked apart and reshaped by a kind but persnickety editor.  I had my first good cry in months (not counting Silver Linings Playbook) when I saw our first edited chapter.
(When I taught English 101/102 at Akron U., we were asked not to use red pen in grading essays, as it was discouraging and looked as if we had bled all over our students' work.  I never before realized how true that was.)

I said some not-very-nice words.

And then, I re-read the chapter with the edits.  Shit.  It was so much better.

Posted by Georgiann at 5:33 AM No comments:

This was a fun little quilt I made for a friend's charity auction.  Unfortunately, I was a little tardy getting it to him (they had a catalog of auction items already made up) -- I could save it for him for next year, but I think I will gift this one, and make him another.  As long as I don't forget and wait until the last minute! 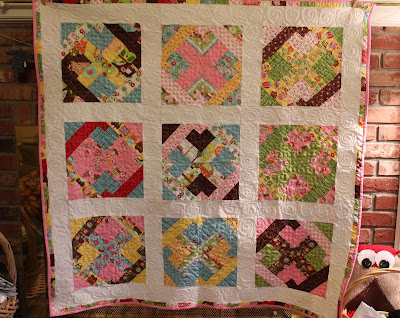 I saw this rubric (rubric?  That's probably not the right term -- what is the right term?) on another quilter's blog, and thought it was a great idea.
Quilt Stats:
Pattern:  Well, that's a good question.  Jenny, from the Missouri Star Quilt Company calls it "The Amazing Jelly Roll Quilt Pattern by 3 Dudes," as the technique was shared with her from the guys at 3 Dudes.  It's a fun construction with jelly rolls strips; I had watched her video on the Jelly Roll Race quilt, and then watched the video for this pattern.  (You should watch her videos -- she is a lot of fun to watch.)

But I think I might call it "Paris Wife", since that's what I listened to while working on it.  (More on The Paris Wife in the March Book Report post.)
Finished Size:  48'x48"
Fabrics:     Moda Cherry On Top jelly roll, some random white sashing and backing  I found on my workroom shelves.  Binding was made from some random pink cotton.
Pieced and quilted by:  me
Dates:  Started and completed in February, 2013.

Here is one of the blocks, looking a little pink around the edges -- my quilt photography isn't getting much better, but I think my machine quilting is improving.  A little bit. 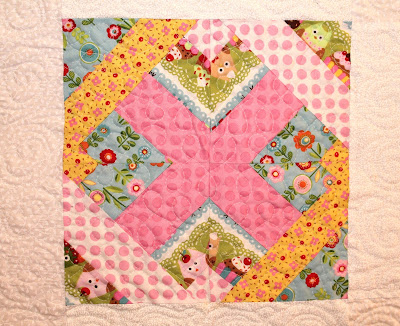 And the back, with a strip of leftovers: 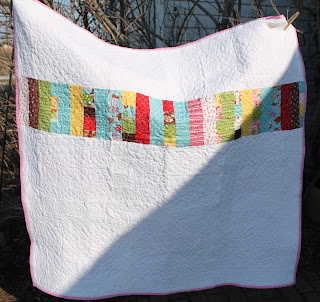 It does look better in the sun, but I somehow didn't even notice that big shadow until I downloaded the pictures.  So, in addition to a machine quilting class, I think I need a photography class as well. 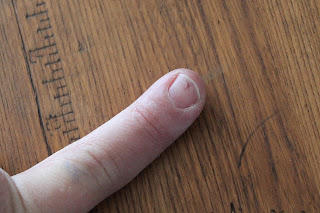 I was trying to maneuver the fabric through the machine at a junction of several seams, and it wasn't cooperating, so I pushed a little harder.  I was so shocked, I forgot to curse.
It's fine -- it really didn't hurt very long at all.  In fact, I'm sort of proud of this battle scar -- I won over both the quilt and the machine!

Posted by Georgiann at 7:53 AM No comments:

Maybe I'll try to do a book report every month.  That sounds like a fine idea.

While I was working on my auction projects, I listened to The Painted Girls by Cathy Marie Buchanan.  (yes, I did once think that listening to books was "cheating", but I was wrong:  listening A) lets you do two things at once,   B) gives you a different perspective on the novel through the emphasis of the reader and C) clears up any pronunciation problems you might have just reading.  You know what I mean -- since no one ever said the word at my house growing up, I thought "penis" rhymed with "tennis."  Now the question is, what books were I reading that had that word in them?  A dirty little western romance passed around on the school bus and The Happy Hooker when I babysat the neighbor kids.  Their mom was so cool.)

In the same tradition as The Girl with the Pearl Earring and The Girl in Hyacinth Blue, this book focuses on the ballet girls familiar from Edgar Degas paintings and sculpture.  It's the story of the three van Goethem sisters who, after their father dies and their mother turns her sorrows to the absinthe bottle, survive however they can -- as ballet girls at the Paris Opera, modeling, working in the wash house and prostitution.  It's rough, but a great story based on historical fact -- I love that, and so respect the authors who put so much time and effort into creating just the right world for their story.  Plus, I love the chichi French accents of the readers (despite the fact that one of the readers also read the fiendish Amy Elliot Dunn sections of Gone Girl.  Shiver.)

The only bad thing about an audio version is that when you find a great book, you want to devour it as quickly as possible, but you are forced to be patient as you listen (I did recently discover that on the iPod you can increase the reading speed, but that just sounds silly.)  I am so glad I didn't have the audio version of Where'd You Go, Bernadette by Maria Semple -- once the last stitches were in my quilt, I sped through this book in a day and a half.  Both of my girls had read it and told me I needed to, ASAP, and they were right.  I'd say it's sort of a cross between Gone Girl and Wife 22 -- a detailed/droll/tense story of disappearance with the benefit of email and social media.  Some reviewers (one from the NYT) called this a humorous novel, but I don't get that.  Sure, it is outlandish that their basement would be full of blackberry brambles, crazy that Bernadette put full confidence (and account numbers) in an online assistant from India, and funny that their neighbor was a complete satirical nutter who ends up with a house full of mud, but I got the shivers several times, wondering how brilliant Bernadette would survive the mess she found herself in and how her daughter, Bee, would survive Bernadette.

I am still working my way through The End of Your Life Bookclub, and toward that end, finished Crossing to Safety by Wallace Stegner.  It's a lovely story about the long-lasting friendship between two couples.  It's also the story about survival in the world of academia -- having married into a professor's family, all the publish/perish references and heartaches attached were familiar and true.

Up next, I'm going to work on another quilt and listen to The Aviator's Wife -- I'm a little anxious about this one, since I am a huge fan of Anne Morrow Lindbergh and Gift of the Sea.  But I need to remember it's just a novel, right?  And I am going to read Ahab's Wife by Sena Jeter Naslund.  Rather, I am going to TRY to read Ahab's Wife -- even though I tried again recently, I am not a Moby Dick fan, and as you know, I am not a fan of 822-page novels.  Atlas Shrugged.  Whatever.

PS Last month was the 200th Anniversary of the publication of Pride and Prejudice, which calls for a re-read, as if a call were necessary.  But I've been thinking lately that Downton Abbey fans should read Sense and Sensiblility -- the legalities associated with the inheritance of a British estate are addressed in that book, and I know that is something we Americans have a little trouble understanding about DA.
Posted by Georgiann at 8:55 AM No comments:

A few years ago, I knitted a Holy Family for our school auction, and thought I would try something like that again.  I love the look of Waldorf dolls (and the idea of the Waldorf Schools), so I tried to copy that look (I have a Waldorf doll pinterest board, if you are interested in learning how to make these).  You can get kits, fabrics, etc. from various vendors on the internet, and there are all kinds of tutorials, but I sort of winged it, and used fabrics, stuffing and whatnot from my collection -- the only thing I purchased new for these was the  roving for the hair. 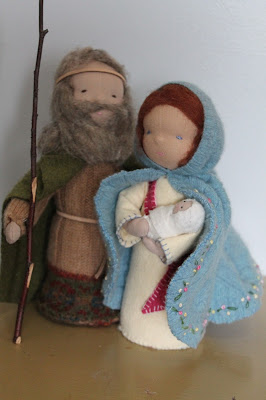 Waldorf dolls, which are designed for imaginative play (therefore, the expressionless faces) are generally jointed with poseable arms and legs.  Since this nativity is basically for sitting around and not playing, I just made the bodies out of  cones of felt (Mary) and an old sweater (Joseph).  Their heads are tightly wrapped balls of Warm and Natural quilt batting, covered with an old sock.  Then, I did a little of the face sculpting with heavy-duty thread and a nice long needle.  The traditional skin covering is a cotton knit tube -- I don't know if I should tell this or not, but I made my tube out an old pair of Spanx.  Then I added a little embroidery for the faces and stitched/glued on the roving for their hair.  The hands are Spanxified, too, and I cut a circle of extra heavy cardboard and slipped in the bottom of each body so that they would stand up nice and straight.

Baby Jesus, done in the same manner, and wrapped with strips of Warm and Natural batting: 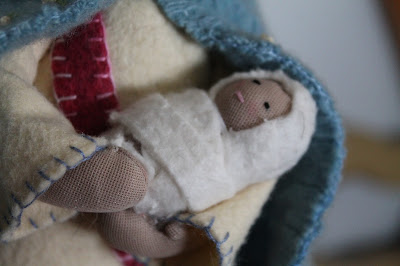 Mary's cape is a cashmere sweater I bought at Goodwill -- it didn't felt down, which was just fine, because that left it nice and soft.  I embroidered little leaves and french knots around the border: 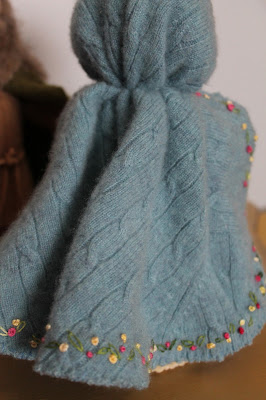 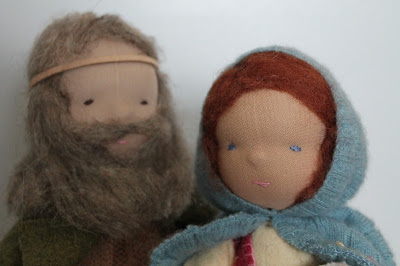 The stable has been in our garage for a couple of years -- seems pretty perfect for Mary and Joe. 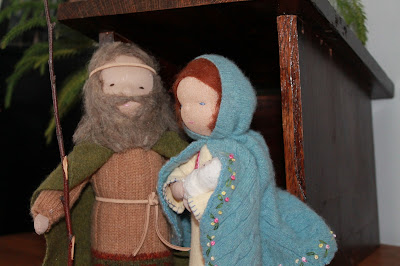 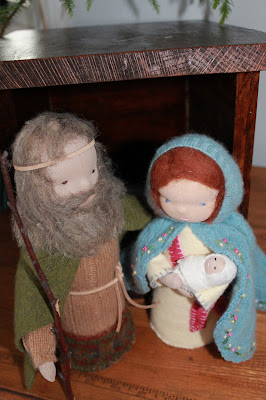 Hope they go to a nice home.

And here is this year's quilt.  It's baby/little kid sized, about 40'x40", made with a bundle of fabric from Fabricworm, plus some of the Heather Bailey fabric I had left from Olivia's car seat cover.  You might notice that there is one block in each color that has a strip of different fabric.  Not exactly a design feature -- I measured poorly.  But I think it came out cute, anyway. 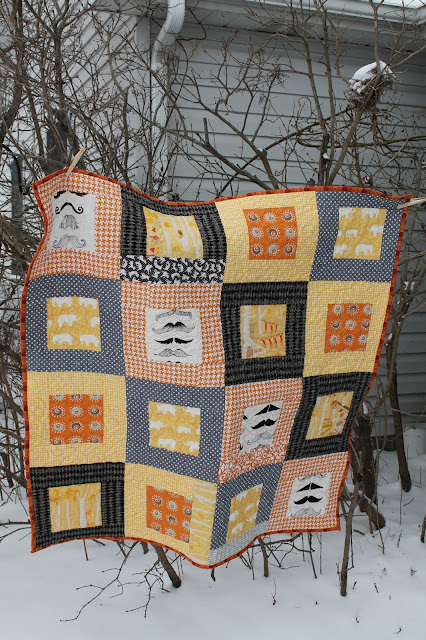 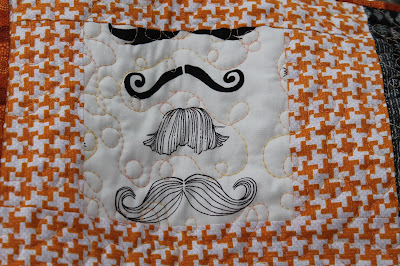 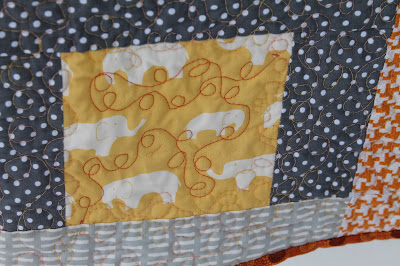 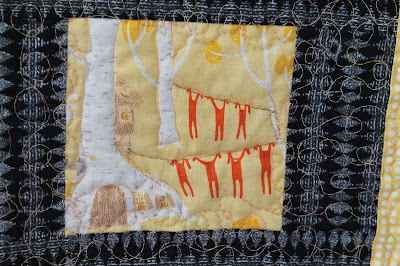 The back and border are fabrics from Sharyn's Quilt Box in North Vernon. 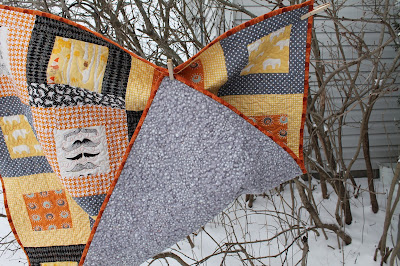 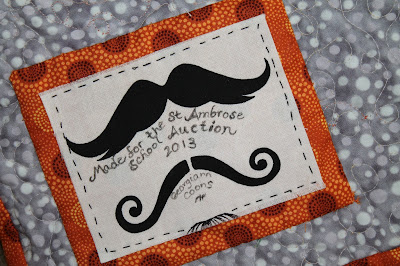 And finally, sugar cream pie for the dessert auction.  I had been thinking all week about what to make, but then last night while we were at supper at the K of C, discussion turned to sugar cream pie, and so, that's what I made.  One for the auction, the other for friends.  If it gets that far. 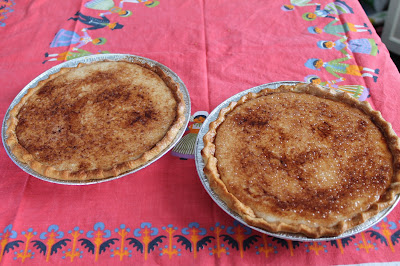