Where the Heck Did November Go?

So that blogging every day in November thing didn't happen.

Guess what else didn't happen?  NaNoWriMo.  I started two novels, was really making great progress on the second, and then life just got in the way.  I need to get rid of some of my life if this is going to work.

I'm still having trouble saying "No" to requests for my time.  Because I guess I must really like being asked.  I really like doing things for other people that keep me away from my desk.  I really like all my nursing home peeps who boost my ego -- Mr. V at the Lutheran Home asks me every week when I am performing in Carnegie Hall because I am the best piano player he's ever heard.  And he's old.  Really old.

I'm also having a little trouble when people say, "So, what are you doing now that you don't have a job?"

And I also spent a lot of November across the hall in the workroom.  I know.  That's why I have a writing desk in the guest room, so that I won't be tempted to craft when I should be writing.  But I can't help it.

Maybe I should write a craft book.  Or be like Debbie Macomber incorporate my crafty adventures into a novel.  Bleh.

And I can assure you that December won't be much better.  Because it's December.

Posted by Georgiann at 4:55 AM No comments:

My sweet niece, Carly turned 16 last month, and I wanted to make her a special cake.  She loves the Florida Keys, and has been there many times on vacation.   She also loves Key Lime, so I went searching for the perfect cake for her.

I had made a Key Lime Cake last year for my office -- it started with a cake mix and lime jello.  It was good, but I wanted to try a different version and found this one on Bakerella's site.  Four layers of moist cake filled with key lime buttercream, then frosted with the same, and topped with whipped cream rosettes.  And graham cracker crumbs pressed into the sides for a lovely presentation. 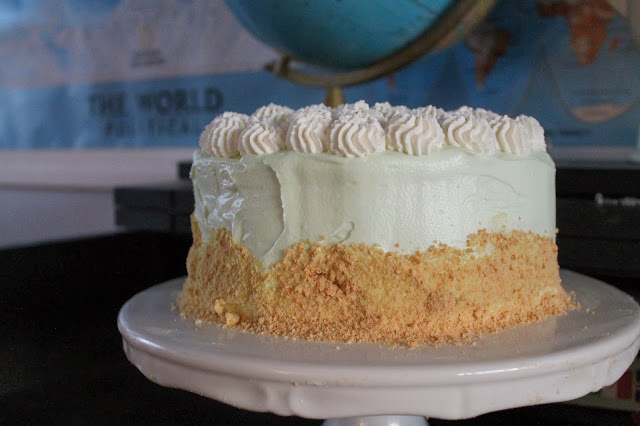 This cake was a hit.

Posted by Georgiann at 7:36 AM No comments:

So Paul wanted to be Robin Hood.  Maggie really wanted him to be Peter Pan.  In fact, she even bought him the cutest hat when we were in Disney, and had his name embroidered on the back.   Basically, Robin Hood and Peter Pan are the same costume, right?  One just has a bow and arrow. 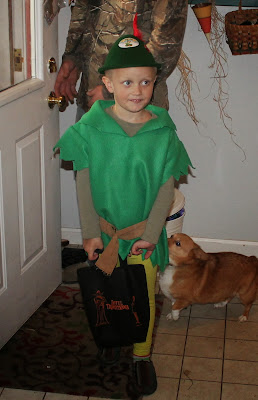 We made the tunic out of fleece, using some internet directions I'm not going to link to, because they weren't so great -- we ended up just winging this one, too.  Maggie found the cute green "running tights like Grandpa's" at WM (yes, they were girl's tights, but I hoped if we made the Grandpa connection he would think they were cool, and it worked), and we made the belt and shoe covers from a pair or corduroy pants she found at Goodwill.

For such a cute boy, he's not crazy about the camera.  Under the bed: 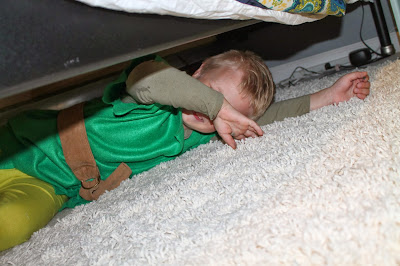 I'm not sure what this pose is, but you can see the shoe cover booties here: 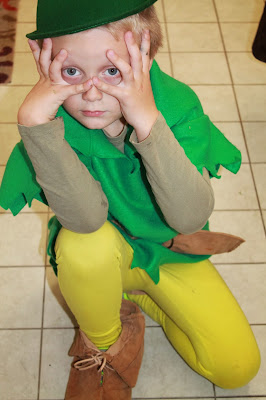 Posted by Georgiann at 7:20 AM No comments:

How happy does it make this Mimi that all three grandsons wanted to be Disney characters for Halloween?
First up, Tommy and Nate as Chip and Dale: 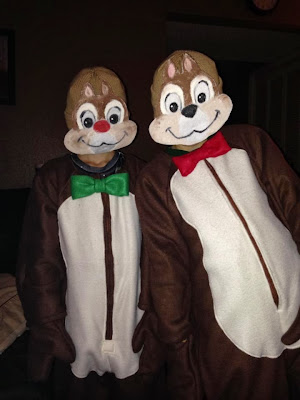 Those hats really aren't supposed to come over their faces, but that's a pretty cute picture!
Here they are from the side: 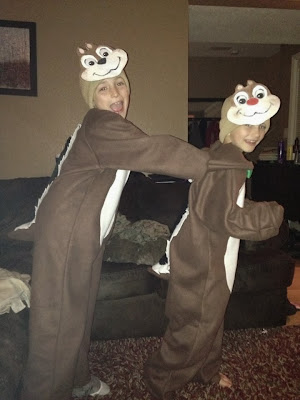 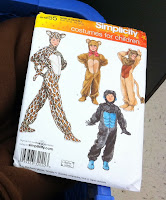 This was the same pattern I made Sarah's tiger costume from for Halloween 1987.  Of course, not the same pattern -- I bought a new one.  It's just amazing to me that this one is still available, except that it's considerably more expensive!

I made their costumes out of fleece, so they would be able to wear them as pajamas since these boys love cozy pajamas!  You can usually find fleece this time of year at a bargain -- I paid about $3.00 a yard.  The pattern advised me to purchase 6 yards of the brown -- that seemed like a lot of fabric, and it was -- I have a ton leftover.  A bit of off white and black for their stripes and tails, and I was off.  The beautiful thing about fleece is that you really don't have to finish any edges, so once I had all the pieces cut out, it was a breeze (well, a breeze after I got the zippers in).  For the detail, I added a stripe of white and one of black on the back, and gave the fleece some snips to make it look fluffy.  I made their little tails like a pyramid, with a little stuffing, and just whip-stitched them on so Sarah could snip them off after trick or treating.  (When Nate first tried his costume on, he told Sarah that his tail hurt.  Turn out I left a pin in.  Sorry, sweet Nater.)  I made each of them a pair of mitts, which I hope came in handy (ha!).

I wasn't too sure how to make their faces, though.  After several failed attempts at machine appliqueing, I ended up drawing then painting the faces onto felt (thanks, Disney Animation Academy!)  I ironed on some stabilizer to make them stand up, then tacked the faces onto brown sock hats. I had plenty of brown fleece left, so I thought I would make them some pillows.  I cut out the letters for their Chip and Dale, machine embroidered them on and as soon as I can get them to give up their hats, I'll applique the faces onto the pillows! 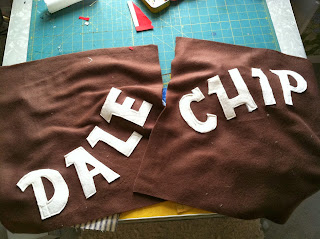 Posted by Georgiann at 7:09 AM No comments:

I am ashamed to say that I just haven't been reading much lately.

But, I highly recommend the one I finished last week:

It's a story of ambitious young brothers who rescue a girl from a frozen river.  She becomes their best friend, and they make elaborate plans to become film makers, specializing in the natural world.  I fell in love with all three of them, and their parents, and want to move to New Hampshire and be friends with them.

Posted by Georgiann at 4:21 AM No comments:

So, you know how I love November.  It's the month in which my parents and my in-laws were married,  in which I was born, and in which Clay and I were married.  (How you like that fancy grammar?  I am slowly embracing the Oxford comma, too.) I am a huge fan of Thanksgiving, the day after Thanksgiving (or as we call it around here, Brown Friday, celebrated with delicious leftovers, a crunchy hike at the refuge and some quality couch time), college football, and artsy/crafty pre-Christmas adventures.

And this year, I'll add one more thing to love about the month:  writing.  Although I've been working on my novels for a while, today marks the official start to my new career.  I have all the things I need:  a brain full of ideas, a newly-decorated writing room/guest room, the encouragement of my family and friends, and my sweet little dog on the floor right beside me.  (I do need a more comfortable desk chair. Or, I might just keep this wooden folding chair I'm sitting on right now -- the slats gouging my butt might be a motivator to complete the 1,667 words I want to write each day.)

And how do I know I need to crank out 1,667 words?  I signed up for NaNoWriMo -- National Novel Writing Month.  If I keep on track (which would be way out of the norm for me -- habit is not my strong suit), I should have 50,000 words completed by November 30.

What is my goal?  Of course, my dream would be to have a novel published by a major house, but more realistically, my first goal is just to get it done.  My second goal is to create something that people will enjoy reading.  My third goal is to blog every day this month, sharing my progress on my novel and other random stuff, as usual.  Away we go!

PS  As many of you already know, Chuck's book is published!  You can find it on Amazon and Barnes and Noble.  He has signings in the Indianapolis area, and we hope to have one down here soon.

Posted by Georgiann at 6:46 AM No comments: